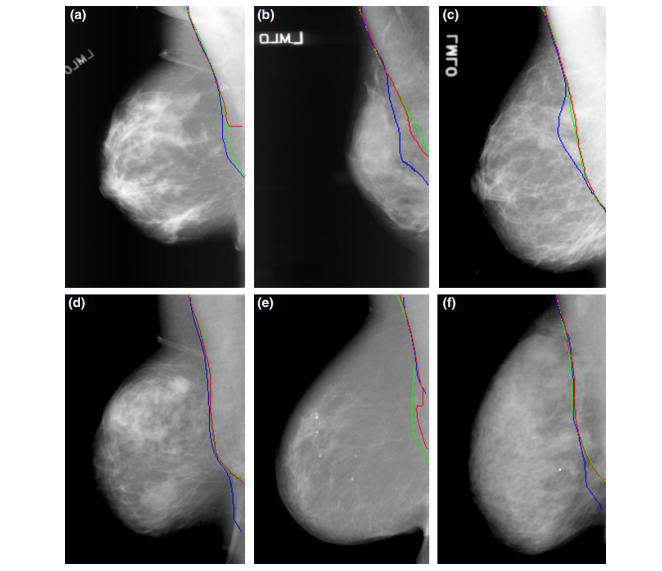 The aim of this study was to develop a fully automated deep learning approach for identification of the pectoral muscle on mediolateral oblique (MLO) view mammograms and evaluate its performance in comparison to our previously developed texture‐field orientation (TFO) method using conventional image feature analysis. Pectoral muscle segmentation is an important step for automated image analyses such as breast density or parenchymal pattern classification, lesion detection, and multiview correlation.

Institutional Review Board (IRB) approval was obtained before data collection. A dataset of 729 MLO‐view mammograms including 637 digitized film mammograms (DFM) and 92 digital mammograms (DM) from our previous study was used for the training and validation of our deep convolutional neural network (DCNN) segmentation method. In addition, we collected an independent set of 203 DMs from 131 patients for testing. The film mammograms were digitized at a pixel size of 50 μm × 50 μm with a Lumiscan digitizer. All DMs were acquired with GE systems at a pixel size of 100 μm × 100 μm. An experienced MQSA radiologist manually drew the pectoral muscle boundary on each mammogram as the reference standard. We trained the DCNN to estimate a probability map of the pectoral muscle region on mammograms. The DCNN consisted of a contracting path to capture multiresolution image context and a symmetric expanding path for prediction of the pectoral muscle region. Three DCNN structures were compared for automated identification of pectoral muscles. Tenfold cross‐validation was used in training of the DCNNs. After training, we applied the ten trained models during cross‐validation to the independent DM test set. The predicted pectoral muscle region of each test DM was obtained as the mean probability map by averaging the ensemble of probability maps from the ten models. The DCNN‐segmented pectoral muscle was evaluated by three performance measures relative to the reference standard: (a) the percent overlap area (POA) of the pectoral muscle regions, (b) the Hausdorff distance (Hdist), and (c) the average Euclidean distance (AvgDist) between the boundaries. The results were compared to those obtained with the TFO method, used as our baseline. A two‐tailed paired t test was performed to examine the significance in the differences between the DCNN and the baseline.

In comparison to the TFO method, DCNN significantly improved the accuracy of pectoral muscle identification on mammograms (P < 0.05).